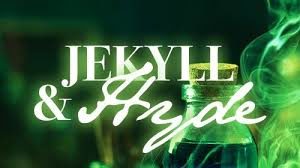 Back in 1886 Robert Louis Stevenson published his Strange Case of Dr. Jekyll and Mr. Hyde. I would doubt he ever thought it would be a standard more than a century later, and certainly not a musical which is very much operatic in style.

You kind of recall the story from your old school days. That weird scientist figures out how to create a compound that could make a person come out with all of his alter ego that would otherwise stay below the surface. Makes you wonder today how it would work if ingested by some politicians.

Heidi Cline McKerley directs a cast of 19 players in even more roles. Chase Peacock comes on as the intellectual scientist and as that evil street villain who kills off so many folks in London town. One thing that is really neat is that Sir Danvers is the father of Emma, who is betrothed to Jekyll. Danvers is played by Jeff McKerley, the husband of the show’s director. Quite a cool way for a couple to work together.

The players work through 30 numbers, probably the most memorable one being Someone Like You, which you’ll recall as a really romantic number. Too bad it brings on such a villain. There are many sung by the ensemble with a choral backup to the one with the solos. And the music, albeit canned, is spot-on as to timing, throughout the production.

I suspect that the inspiration for Stevenson was considering that it is not always what you say, as what you do, which truly matters. I say the show is quite like an opera, it certainly isn’t like an opera comique, since so may folks, including leads, have shuffled off their mortal coils. It’s probably not for the little folks, who are not familiar with the story, even though there are no expletives. The show runs about 2.5 hours and there are good seats, free paring, nice goodies, and easy to get to. More info at AtlantaLyric.com