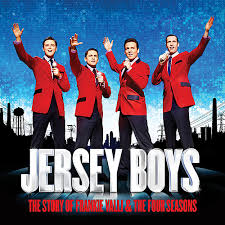 Jersey Boys, the Story of Frankie Valli & The Four Seasons has hit the boards big time at the Fox. This huge touring company will play here just this week. The show has been seen by millions of folks around the world and, obviously, is about that group of performers who hit the #1 Charts big time in the 1960’s with numbers such as Sherry, Big Girls Don’t Cry, Can’t Take My Eyes Off of You, and so many more. You will want to clap in time and sing along. Just don’t be too loud . . .

Things weren’t easy in Jersey in those days, and working out deals with record labels and promoters and buying air time wasn’t for sissies. The principals are Jonny Wexler as Frankie, and Jonathan Cable as Nick Massi, Eric Chambliss as Bob Gaudio and Corey Greenan as Tommy DeVito. They were the Four Seasons.

The show is presented with great energy on a set which changes somewhat as the team works through gigs in their career. There may be only 15 players on stage, but the amount of gear they haul from town to town is huge and they must have plenty of grips touring with them.

This is not one for tots, nor Ms. Prim, as the “F word” is the universal modifier and the show is scripted with real street lingo from them days in Jersey. But, older adults will revel in the tunes, dress, movements and all that kind of stuff when we used to actually be able to understand the words that groups were singing.