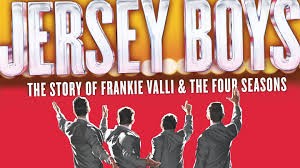 Well I gotta tell you about this one. This show played here in 2009 and 2012 and sold out most dates; so it’s no wonder it done come back again. When I first seen this one, I was kind of wondering what they was thinking of. Like, I mean the stage was just a chain link fence and a raised walkway and I kinda thought this was gonna be another one of them cheapie road shows with no props or other stuff and I was thinking how to get out of there by intermission. It’s pretty much the same set but with some terrific projected images, and plenty of live musicians onstage and just offstage.

They start off with some rap type singing. Jeez. I kinda thought I was gonna sit through 2 hours of that, then one of us must be crazy. But that was just a weird thing they put in to get your attention and then they went back to Jersey and the show got started for good.

When I say “for good” I mean like GREAT. Like, you probably know the name Frankie Valli, but most of us forgot the Four Seasons who were his back up group; and while we recall the music, if not the lyrics of two or three of his hits, we sure don’t remember all of them what they played in this show.

Frankie was just another one of them punk kids and he had this kinda alto pitched voice. The priests would have loved to have him the choir. He is played to the freakin’ hilt by Aaron de Jesus who brings down the house with his performance. Like, I mean he ain’t good. He’s terrific. I would say the best Frankie I ever seen.

Matthew Dailey, Keith Hines and Drew Seely play the other three guys in the group. You gotta understand they all come from Jersey and they got that certain background, which includes maybe blowing a little grass, using them words that the teachers was always giving them problems about, sucking some brews, messing with chicks and maybe rolling a few dice or cards.

So, don’t take the kids if they don’t already know the words, because it’s all right out there. You know? On the other hand, unless they live in a monastery you can bet your buns they learned all the lingo at the school yard before they got out of 5th grade. It is what it is.

And because of the time frame for the Frankie Valli story, you got a lot of stuff what appeals not only to regular folks, but also to a mess of AARP card carriers. So everybody really gets off on this one. I can tell you that when they got to the final number, that everybody’s heart rate had gone up a hitch, and you left the theater feeling a sense of excitement as if you had a ticket on a winning perfecta.

Do I recommend this one? Get serious. The show is just about sold out. I don’t care what you gotta do to get tickets. As Tony Soprano would say, just do what you gotta do. Hear?
Go to FoxTheatre.org for info, times and tix.