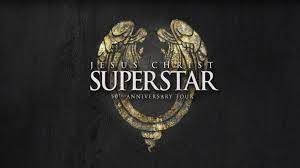 It’s been many years since this opus has played at The Fox Theatre, and while this production, originally performed in an open air venue in the UK, is based on the original production with the music by Andrew Lloyd Webber and lyrics by Tim Rice. It is being done as a rock opera concert version in one bombastic act that could blow the walls off the house.

Yes, the story is the same, and you will recall the two most famous numbers, the Superstar number and I Don’t Know How to Love Him. This one is staged with the band upstage and running at full throttle, while the cast of more than 24 players belt out the songs as they move around on a static set, that is pretty obviously designed with a religious inspiration.

Aaron LaVigne comes on as Jesus, while Judas is played by Omar Lopez-Cepero and Mary is Jenna Rubaii. This is a touring company that closes here on Sunday and will open in Greenville, SC next week. One thing to know before you come downtown is that the Fox’s adjacent parking lot is closed down and nearby parking runs from $30 to $50 for the show. No wonder it is like Broadway in America, when the fees are like NYC.

Know that it probably isn’t for the little ones, even though it runs only 90 minutes from a 7:30 curtain. It’s an experience for we older folks and it’s one which could be described as different strokes for different folks.