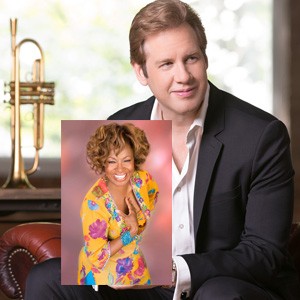 Once again GSU’s Rialto Center has staged a glowing tribute to the work and memory of Savannah native, Johnny Mercer. He may be best known for works such as Moon River, but he’s was a workaholic who composed more than 1,000 songs.

This concert, which took place on February 26th featured the GSU Jazz Band of more than 20 players under the direction of Dr. Gordon Vernick and with special guest stars including GSU alumnus Joe Gransden who is famous for his work with A-list bands, as well as his gigs here in town and around the country.

Joe plays the trumpet but also croons so well, and unlike me, he can remember all the lyrics without an iPad in front of him. He was so happy to bring on Kathleen Bertrand, another Atlantan; and one who has sung at the White House, for the Olympics and in 2015 was named as Jazz Vocalist of the Year by the Black Women in Jazz Organization. She’s played around the world and isn’t quitting. She’s currently working on an upcoming new CD.

And were this not enough, Joe also called on ton the stage Marilyn Maye. This is the young 88 year old who still plays to SRO houses when she takes down the walls in NYC. This is the lady who was on the Tonight Show more than 70 times, and Ella dubbed her as “the greatest white female singer in the world.”

This is the kind of show that if you see it coming around again in a year or two, try not to miss it. Easy to get to (if you can survive the traffic downtown) and even offers free garage parking. Next up at the Rialto will be the biennial Contemporary Dance Festival, which will hit the stage March 3rd and 4th. For more info and tickets visit Rialto.gsu.edu

And if you like big band jazz, don’t miss Joe Gransden and his big band who will be performing Monday, February 29th at Geogia Ensemble Theatre in Roswell. They’ll be doing a collection of the best of Benny Goodman. So you may be able to Sing, Sing, Sing!