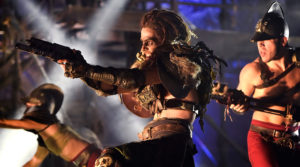 Giulio Cesare in Egitto was the name of this Baroque Opera by George Frideric Handel in the days when he was living in Italy and dived deeply into the culture. It premiered at the King’s Theatre in London in 1724. As most operas of those days, you know somebody has to die, and indeed they do.

Caesar is thought to have been born in July about 100BC. He had been through a lot of turmoil and fled Italy after the Roman Civil War, going to Egypt about 48BC. Caesar is sung by Daryl Freedman, which is quite appropriate inasmuch as it was originally scored for an alto castrato, which is passe in our era. He is going after Pompeo (Megan Marino). The boy king of Egypt, Tolomeo (Daniel Moody) gets caught up in the stuff as does his sister, Cleopatra (Jasmine Habersham). Things go back and forth in intra-family contriving as well as forces of destiny visiting upon the nobility and the serfs.

The work by Handel is basically for a chamber orchestra and this one is under he baton of Gary Thor Wedow. The ballet scenes were choreographed by Donald Byrd and really well done by the cast. The opera was chosen to be staged here for the first time, as Director Tomer Zvulun had staged it some years ago when he was in Israel; and had it firmly engraved in his mind for the location, age, characters, and politics involved. Ergo this is a co-production with the Israeli Opera. It is also very moving in that in those olden days a woman was chattel and she belonged to the man who claimed her. Hopefully, those days may soon be history not just here, but worldwide.

This is a very moving, and well produced opera which plays only a few more nights at Cobb Energy Performing Arts Center. Easy to get to, garage parking, good seating, and very strict security. Bring your CDC cards and masks with you and know that your belongings will be scanned upon entry. More info and tickets at AtlantaOpera.org