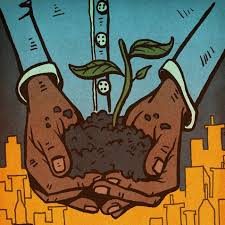 August Wilson has written many plays about the African American lives in the past 100 years. This is the ninth such play and the tenth was Ma Rainey’s Black Bottom. While he penned quite a few works, he passed away in 2005 at age 60. August Wilson had a difficult life, but basically self-taught himself. He won two Pulitzer Prizes and was awarded a honorary degree from Carnegie-Mellon University.

This play takes place in the black suburbs of Pittsburgh in the mid 1980’s. We meet an ex-com, King (Thomas Neal Antwon Ghant), who is recently out of the slammer and trying to build a life. He wants too buy a record store but needs $10,000 to close the deal. His plan is to raise the money by selling off stolen refrigerators, and he brings in his friend, Mister (Eugene H. Russell IV), to aid and abet him in return for a piece of the cake.

His mother, Ruby (Tonia Jackson) wants everybody to get on with life; but there are some questions which might might have answered by a DNA test in these days. Ruby’s “friend” is Elmore (E. Roger Mitchell), who also has some problems and his own agendum. The other two players are the old guy next door, Stool Pigeon (Eddie Bradley, Jr.), And Tonya (Tiffany Denise Hobbs) who is King’s significant other.

These were the Reagan years, when trickle down economics didn’t seem to trickle down as fast, and as big enough as needed. So as Tony Soprano would say they did what they gotta do to get by.

There is some weird stuff in the play as when we find King planting seeds, probably not MaryJane, and then planting a dead cat shallowly. In the event that another life comes to it. There are also stress themes when guns are at hand and some serious feelings get out in the air.

The set is by Moriah and Isabel Curley-Clay, who always do an incredible job. Jamil Jude directed this one, with a terrific cast. I guess one of the bottom lines could be that while we’re all entitled to equal justice and treatment; that it may still be a dream akin to wanting to see pigs fly.

The theatre is located at the Fulton County Southwest Arts Center, on New Hope Road. Easy to get to via 285 and exit at Cascade Road and you are a couple of minutes from the Center, with plenty of free parking and security. More info at TrueColorsTheatre.org