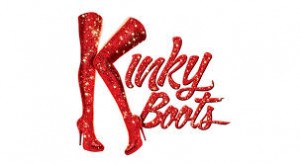 OK, . . the show is kinky, but it sure is a hit and excites the audience. Based on a 2005 film, it is a musical written by Harvey Fierstein with music and lyrics by Cyndi Lauper, and it won a Tony for Best Musical.

The story line is about a shoe factory in Manchester UK which is in tough times as the manufacturing went offshore. The company is Price and Son, and the senior Price has just passed on, leaving the factory to his son, Charlie (Adam Kaplan) who had never really seen himself in such capacity and with such responsibilities. He probably will have to shut it down, liquidate everything and all those classic townies will be out of work.

Then he runs into a drag queen named Lola. Her masculine name is Simon and he/she is played to the hilt by J. Harrison Ghee. What happens when they meet is that, as Simon says, they can make money by designing high fashion footwear that drag queens will find helpful; in that most spike heels just don’t want somebody weighing in at 14 stones parading around in them.

Charlie convinces Lola to hang in with him and help design a line that they can then take to the big fashion event upcoming in Milan. The factory staff aren’t quite into the game at the start, but they have to get on the ball and get the work done, because the market just isn’t there for what they’ve been making for the past decades.

What really moves the show along is that Lola has a back up of a chorus line of queens called The Angels, and they just really rouse the audience. If you’ve never seen a drag show cabaret, this is the one to start with. The dancers look very feminine and you have to check their height and upper arm muscles to see the masculinity, as their packages are tightly closed. Some of the women in the audience felt badly inasmuch that the legs on stage may have looked better than their own. Hey, . . . that’s just the way it is.

An absolutely superb production with great costumes, live orchestra in the pit, and fantastic choreography. It’s one of those productions that is a couple of hours of pure entertainment. You may not leave the theatre humming any of the tunes, nor recalling the lyrics. But you will remember that you had one bitchin’ good night at the Fabulous Fox.