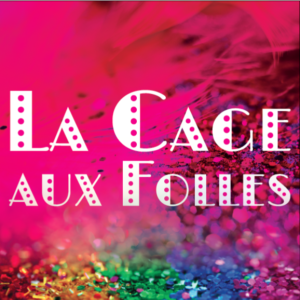 It was 36 years ago that La Cage hit the stage in New York. Some things were quite different in those days; but then it does bring to mind the old French saying that “The more things change, the more they stay the same.” The show title actually translates to a cage of mad women. And you may interpret the word “mad” as crazy or as riled, or maybe both.

A truly spectacular production directed by Paul Conroy, with a cast of 15 incredible players, most of whom come on a drag queens. What you probably don’t get is that most of these alluring females, have appeared in many theatre productions as just average guys. What is such a delight to the eyes, is both the costumes by Jay Reynolds, and the exciting choreography by Jordan Keyon Moncrief.

The story is about a gay couple who live above a night club, La Cage, and Georges (Tony Hayes) the he/him of the duo is the owner and emcee for the club. His “wife” is the ego-centric Albin (Clint Clark) who comes on stage at the club as ZaZa and is always stage center. There is a son, Jean-Michel who has fallen in love with a girl, Anne, and they are engaged to be wed.

But, Anne’s parents would be terribly against such a son-in-law in that the father of the bride is a politician who heads up the Tradition, Family & Morality Party. And the parents of this young man would be a publicity problem for her parents. Jean-Michel wants his parents to come off as “normal” so he gets Dad to invite his long lost Mother to the meet-up; except she had other plans. So what to do? The gent who has acted as his mother for most of his life, decides to show up in drag and come off as Mum.

Some things get even crazier, as the media has found out that the politician is in town and they learn where he is, and the have stormed the premises to grab many shots of Mr. Homophobic at a gay club. So what to do, again? You have to see the show to see how they handle it. Needless to say that all comes out right iin the end (no pun intended).

With a full band under the baton of Nick Silvestri, this one comes off as good as anything you’d see in NYC or London. You will enjoy them all standing up to let folks know that they are what they are and that some days may even be the best of times. Just have to deal with the other days. Remind you of family or some currently in office?

Out Front is easy to get to downtown, valet parking, open bar and goodies, and all seats unobstructed views. More info at OutFrontTheatre.com