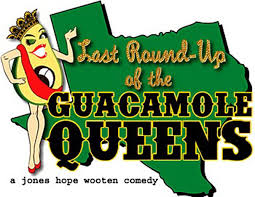 Last Round-Up of the Guacamole Queens
New Theatre in the Square
through February 19, 2017

Jessie Jones, Nicholas Hope and Jamie Wooten love to craft comedies under the pseudonym of Jones Hope Wooten.  They usually focus on groups of ladies as they try to work their way through disasters in the making.  This latest one of their plays is set down in Sweetgum, Texas where the Vereen cousins are trying to save business which is the Wide Bride shop, and do some event planning for the final reunion of the class from their high school, where one of them had become the Guacamole Queen some years ago.

Gaynelle (Lynda Palmer), Peaches (Terri Callozzo) and Jimmie Wyvette (Abby Avery) each have their own to-do list, including attending the funeral of a dead ex, trying to attract some guys to a gal who works beautifying corpses, and overcoming some bad on-air publicity after a religious relapse.

The story starts off on a local station with CeeCee (Marsha Fennell) as emcee of a broadcast where she’s trying to bring everybody together.  Well, that ain’t gonna happen.  There’s an aunt who is determined to get elected mayor (Marge Krengel) and also be Queen.

The reunion has no place to be staged and I can’t tell you all of what takes place, as you gotta go see this one for yourself.  I can tell you that there are laughs aplenty.  The old geezer (Bill Mann) with the oxygen tank gets into it with two sisters at the same time, and one of the cousins winds up in a fracas with the local Sheriff (Frank Harris).   What else could happen?  Could one of the gals start having an affair with Dewey and his right-hand guy Obediah?   Not sure if it will work, but you gotta hand it to them for trying.

Directed by Peter Borden, with a cast of 12 players, the show is a full-time riot of chaotic stuff when anything that could go wrong seems to with great aplomb.  The Theatre in the Square is right there in Marietta, easy to get to, on-street parking, comfortable seating and good view from any seat in the house.  For more info and tickets go to TheatreInTheSquare.net