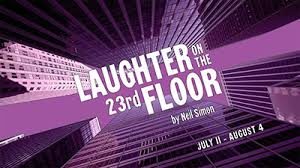 Laughter on the 23rd Floor
Stage Door Players
through August 4, 2019

A classic tale told again in a really classic manner. Neil Simon was one of the writers for Sid Caesar, and he and the gang work at Rockefeller Center. The offices had been on the 11th and 12th floors, so he put them together to create the 23rd floor.

Kate Donadio MacQueen directs a super funny cast of nine players, at the time when NBC was thinking of reducing the 90 minute show to 60 minutes, and cutting back on costs; including various perks such as free coffee and bagels. How could they have thought of being such meanies?

Doyle Reynolds plays a writer who is from Mother Russia, and Daniel Parvis plays a Irish chap who is part of the writing team. Mark Gray and Matt Baum are also part of team with weirdo Ira (David Allen Grindstaff). And yes, there are some women in the story such as Carol (Erin Burnett) who is on the team and a gofer for Lucas played by Rachel Frawley.

The young Lucas (Shaun MacLean), is thought to be the young Neil Simon, and Max Prince, is an egocentric character we think of as Sid Caesar; played to the hilt by Robert Egizio.

The scenes through the windows of Rockefeller Center area were done by Chuck Welcome and were a really nice work of art. Like any Neil Simon work, this is a work of laughter aplenty, sometimes set on pathos, in the blacklisting days of Joe McCarthy. And, I can tell you it is superbly done by this cast who seemed to enjoy the play as much as the audience did.

More info and tickets at StageDoorPlayers.net