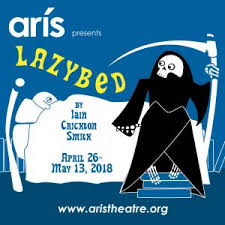 The Celtic theatre, Aris, is presenting this most unusual work at 7Stages which is in Little Five Points.

Iain Crichton Smith was a teacher and writer who won many accolades for his works. He wasn’t into religion much; his own or that other one, which always seemed to be building walls.

Murdo (William Webber) is a young man whose idea of essence is to just hang out in bed. He obviously does not see his value to himself nor his community or family. His mum (Natalie Karp) keeps trying to get him off his arse, but also tries to understand him and comply with his wishes. None of this makes much sense to the neighbour woman (Lisa Blankenship) nor others who come into the scene from time to time.

Edwin Ashurst comes on as an insurance salesman doing a real hustle, and a medical specialist who has no real plan to cure the young man. Jon Ragan plays his brother as well as the visiting minister who is getting nowhere in a hurry with helping Murdo. There is a young woman, Judith (Karina Balfour) and there is a slight possibility that the two of them might have eyes for each other. But then, everybody has to deal with that devilish Death guy (Ryan LaMotte) who seems to show up when least appreciated, scythe in hand.

Kyle Crew directed this one, which is one the back stage but works quite well. You do get drawn into the various doings, and maybe think of somebody you know, or your own feelings from time to time. After all, why are we here, sans raison d’etre?