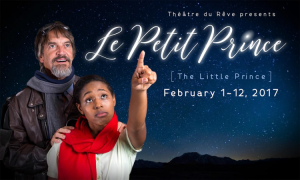 Our French Theatre of Dreams starts off it’s 21st year with their adaptation of Antoine de Saint-Exupéry’s children’s classic, The Little Prince.

The show is on the back stage facility at 7 Stages in Little Five Points.  What is really cool is seeing two fantastic actors doing a 75 minute schtick all in French, without a problem.  I couldn’t do that much in English.  Atlanta’s renown Chris Kayser plays the aviator which the author dew upon his self to include in the tale.  And the prince is played by Jasmine Grace Thomas who recently was graduated with degrees both in theatre and French.  So she carries off the role with great aplomb.

If you are not familiar with the story, it is about an aviator who winds up stranded in the Sahara and meets up with a prince from some asteroid.  They have trouble understanding one another, but as the tale for children goes on, they bind and grow together.  As the prince feels that adults can be pretty weird, and the adult seems to benefit from seeing himself anew.  So there are ideas strewn for both the youngsters and the older folks.

Carolyn Cook, who founded this group serves as the Director, and everything moves along just fine.  You don’t have to be fluent in French to enjoy the show as they also project English super-titles.  If planning to take in the show, try to be a little early and seat yourself on the longer side, to the right as you enter, and higher up; as ths will give you better view of the projected titles which appear on the wall in front of you.