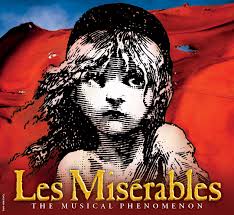 OK. You saw the film and/or the show before; maybe several times. But, you may want to grab tickets NOW to see this touring production which is part of the Fifth Third Bank’s Broadway in America series.

The play, derived from Victor Hugo’s book has been playing around the world now for 35 years, and hasn’t lost a thing. In light of the inhumanities and devastation that we see on the news each day, it may still be quite relevant in so many ways.

This is the most incredible touring production which has come to town in many a year. The sets, lighting, projections and costumes are top of the line. And the voices of the leads in the show are all really exciting. Nick Cartell is the good guy, Jean Valjean, which the nasty guy, Javert is played by Josh Davis. Paige Smallwood is Eponine and poor grown up Cosette is Jillian Butler. There is not a single scene which is not brought to life in a true Broadway manner.

Directed by Laurence Conner, and with a really good live orchestra in the pit, this show which runs about 2 hours 45 minutes is one you enjoy every minute of. It is playing to really sold out houses, so you may have to deal with a re-seller, who is related to The Master of The House.. And if you can Marta there, you’ll save a bundle on parking fees. More info at FoxTheatre.org