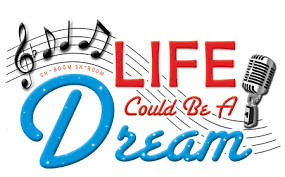 Life Could be a Dream
Art Station Theatre
through July 30, 2017

Art Station has put together a really neat production of Roger Bean’s opus dealing with the doo-wop singers of days gone by. Under the direction of Karen Beyer, a cast of five players sing, dance and clown their way through 19 numbers, with live band just off-stage.

Jacob Jones is a nerdy young man living with his mother. He wants to enter a contest being run by a local radio station where the winner will get a record contract. He hooks up with two buddies, played by Nathan Hesse and Rodney Witherspoon, II. After some back and forth decision making, The group, Denny and the Dreamers start to prep for the gig.

Then a fourth guy shows up. Clay Mote plays a garage guy who works for the firm that is going to sponsor the contest, and he and the boss’s daughter (Joy Walters) have eyes for one another. There’s a lot of teen age stress. Like the girls’ parents wanting to control her choice of boyfriends, and mother of Denny who keeps nagging him to get a job.

But the show is about the music, starting off with Life Could be a Dream (Sh Boom), including Runaround Sue, Unchained Melody and so much more. Even Rama Lama Ding Dong. If you have an AARP card, you’ll probably try to sing along.

Patrick Hutchison, Dik Holland and Jonathan Mills are the band, just off stage left. You’ll enjoy the songs, the dance routines and the acrobatics; nobody gets killed in this one.  Art Station is easy to get to in Stone Mountain Village and they have goodies available and art galleries as well.
More info at ArtStation.org