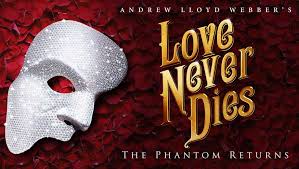 Let me start by skipping to the bottom line. This is one you MUST see! Just imagine that the Cirque du Soleil and the Metropolitan Opera joined hands to present an English language opera with full background of incredible sets, props, costumes and performers and that it was penned by Sir Andrew Lloyd Webber, who had previously brought you Phantom of the Opera.

I am not going to get into the story line other than to say that the Phantom (Gardar Thor Cortes) has showed up 10 years after his assumed demise. He is still enamored of Christine (Meghan Picerno); but there’s a problem inasmuch as she has married and has a child, Gustave (Jake Miller) and as the plot thickens you find that they are not the only ones involved in lusting for the affection of another.

The score resounds with Phantom-like music, and there are some bars which appear to be derived directly from Phantom. The songs, however are more operatic than show tunes. The only one you may really pick up on if played on a radio may be Bathing Beauty when the ladies are all at the beach and Mary Michael Patterson sings the number backed up by a chorus of other ladies as they show off some wild costume changes.

There is a full orchestra in the pit, and one unique aspect is that what sounds as an overture starts off Act II, not Act I. When this opened in London a few years ago, it ran for less than a year and received mixed reviews. It was closed and re-tweaked and now is one of the most incredible evenings you could hope for.

It closes this Sunday, so hop to it, or you’ll be sorry to miss this one.