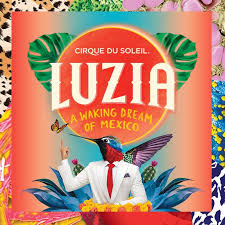 What a treat that Cirque has returned to downtown under their Grand Chapiteau at Atlantic Station. Most Cirque shows are very much into acrobatics and this is no exception, except for the use of some real water pouring down onto the circular stage which collects it and sends it back up. The water is enhanced by some crafty electronic projections, and is a delight.

The show is allegedly about Mexico and what a treat to have it here, absent anybody talking about wall building. Cirque is the largest circus company in the world, and performers from around the world are privileged to work with them. This troupe has plenty of members from eastern Europe but actually also has some from Mexico and the USA.

Like any circus there has to be a clown (Eric Fool Koller) who works the audience while the sets and costumes are changed for the next act. This show features about 18 acts, performed in two segments of about an hour each, with a half hour intermission. It is a show that you can not be disappointed with.

In the second act you’ll meet two performers who are absolutely top of their class in every respect.  Juggler Rudolph Janecek from the Czech Republic holds the Guinness World Record in his work, and Aleksei Goloborodko from Russia is a contortionist beyond the limits of his profession. While there are no high wire or slack wire acts, the double swing acts are mind-blowing.

Easy to get to Atlantic Station, plenty of garage parking, and an exciting venue for kids from 5 to 95. Tickets and more info at CirqueduSoleil.com/luzia