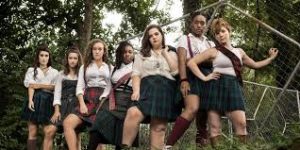 If you recall the tragedy of Macbeth, and remember those three hags chanting double-double toil and trouble, then this is NOT the same one you read in the classroom nor in Classic Comics.

Erica Schmidt adapted this work from the Bard of Avon, and it brings to the stage some of what you may recall and a lot of what you could not have imagined. Seven female actors take the stage, which in itself, is quite different from what Shakespeare would have seen, since women were not permitted to be onstage in those days of yore.

Emily Nedvidek is Macbeth, who comes into some troubles with Banquo (Ash Anderson), and has to deal with MacDuff (Anna Williford); while Lady Macbeth is played by Antonia LaChé. The cast is energetically rounded out by Shannon McCarren, Jasmine Thomas and Abby Holland who are the three witches as well as ten other characters.

The show is directed by Jennifer Alice Acker and the incredible fight scenes were created under the direction of Jake Guinn. This is a tale which starts and ends as one might recall, but the journey through life is quite different. These characters are all young preppies who are dealing with their own issues of life in general while projecting much of that into their portrayal of the classical figures.

The show is exceptionally well acted and staged and is really a memorable event. Not sure the kiddies would really get into it as much as AARP members do; but the audience was really drawn into every minute of this one. More info at SynchroTheatre.com