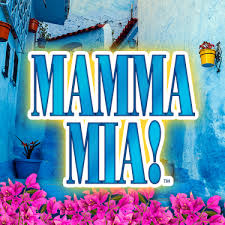 How good does a show have to be, to be sold out before it’s first night? This one is more than 90% sold out for their entire run, and if you get to see it you will know why. The great ABBA musical, directed by Justin Anderson has everything you would see in a national touring company. But, . . . in a smaller venue you get to feel as if you are right up on stage and close to the performers, rather than sitting behind 1,000 other folks.

You know the songs, and the story line about the single mom on a Greek island whose daughter is to be wed. But, the young lady has no idea who her father may have been and the story evolves from her investigations and desires.

Sophie is the youngster, and is played by Hannah Church. Her mom, Donna (Kristin Markiton) runs the taverna she built and runs. And the fiancé, Sky is Nick Arapoglou.
Every one of the performers is belting out numbers, even if they are singing backup offstage. Chris Kayser (possible father Sam) even manages to sing, as do Travis Smith (possible father Bill) and Greg Frey (possible father Harry).

Macie Millard and Terry Henry play off one another and really come on singing the Chiquitita number in Act 1. The entire cast of more than two dozen players put incredible energy into this production. The choreography by Ricardo Aponte is really exciting, and the orchestra under the baton of Ann-Carol Pence deserves an award for their great output. And if the music, dance and story aren’t enough the costumes and props are also first class. YOU COULD NOT ASK FOR A BETTER PRODUCTION.

If you don’t get to see it in Lawrenceville, just think of maybe going to the Ferst Center at Georgia Tech where it will run June 9 to 24. But, don’t wait. Try to get to see it now, so you can see it again in a few months. More info at AuroraTheatre.com