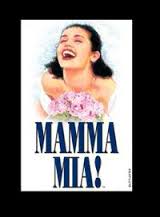 They’re back again, again! Thank you Fifth Third Bank for bringing such a smash hit back to town. It was last here in 2014, with pretty much the same set. I had said then that the show is a pure delight from the opening number to the closing curtain; and that is just as accurate now . This is a show that really has “legs.”

The real star of this show is the music of ABBA which seems as relevant today as it was years ago. The playwrights took the songs of ABBA and wove a fine tapestry of a plot around them to delight the audiences. The show is a theatrical buffet, featuring a wide array of music, costumes, dance, humor, great lighting and one very versatile set. They’ve spiced up the repartee a bit with a lot of almost single-entendre slightly off-color gags, which adds a little kick to the show. If you have seen it before, you’ll enjoy it again. If you have never seen it, you’ll find it an evening of great joy.

Betsy Padamonsky is just wonderful as Donna Sheridan, the single mom, who’s daughter, Sophie (Lizzie Markson) is to be wed. Sophie wants her dad to give her away, but there’s one problem. Nobody knows which of three former lovers may be her father. So, without telling her Mom, she just invites all three to attend and everything goes somewhat whacko.

The three potential dads, as well as the trio made up of Donna and her 2 BFFs, all have just great voices as well as stage presence; and the choreography is top notch as well.

So, sit back, relax, soak up the lyrics and revel in the joy that transcends the production. This one is a real winner and don’t we wish every visiting show would be just as good.

Warning. . . . Don’t be in a rush to leave at the end of the show. The cast comes back after curtain calls to reprise many of the numbers for another 15 minutes, as the audience joins in. And, if you really liked the songs but couldn’t catch all the lyrics at the Fox, just listen to the CD and you’ll enjoy it all over again.

It closes this weekend, so book your tickets now and enjoy a tradition right up there with Fiddler, Phantom and Cats.