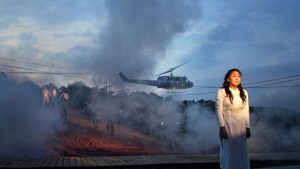 Miss Saigon is a somewhat adaptation of Puccini’s Madam Butterfly moved from Japan to Vietnam and the 1970’s as the Vietnam War draws to an unacceptable end. Many of us may recall the remaining Americans from the Embassy being airlifted off the roof by choppers, as the streets were not passable under control of the People’s Army.

The play was crafted by the same folks who brought us Les Miz, and also deals with people fighting off despair and destruction in hopes of finding a better life. The award winning production has played in huge facilities around the world, and the highlight was the helicopter coming in onstage in Act II. Not a real one, just a fantastic prop. And it was the main thing that most viewers stored in their memory banks.

It was on a small Norwegian island that a theatre company staged the play in the open air, and used a real helicopter. This may have been an inspiration for Brian Clowdus and his associates to bring this to life at Serenbe.

Let’s just say the story is about some GIs who have flings with working girls in Saigon (Ho Chi Minh City) and how true love doesn’t always work out quite the way one may wish. I don’t want to spill the beans as to some of the plot twists. Because you won’t see it coming until it gets to you.

Serenbe is down south of the Airport, and you can get maps from their website. Their production is staged in a field with rows of chairs facing a one-set stage which is basically a rice paddy. There are some really good costumes and dance moves, and while you never see them, there is a full live orchestra behind the 19 actors. Audio and lighting are no problem. Just hope it doesn’t rain during a performance.

We meet Kim, a young woman who gets sucked into working for a hustler and pimp dealing with the GIs. Niki Badua is terrific as Kim, and Eymard Cabling is the character-within-a-character called “The Engineer” who will say and do anything to get what he wants. Oops. . . . Maybe he should have run for office.

The GI named Chris (Chase Peacock) gets hooked on Kim and in deeply. The story is one that is very stressful. It is not for the kiddies, as they won’t get the historical connections; and could also be tough for some who lived through the war in Nam. You have to salute Brian Clowdus for having the guts to take this one on. The music is good, if not the type that you leave a theatre humming; and the voices are strikingly good.

If you’ve not been to Serenbe before, make sure you plan your visit with due consideration for the rush hours traffic on our highways. There are fast food places nearby, and places to eat in Serenbe. Be aware that this is out in the open. You drive in on a dirt road, park in a field, walk over to the amphitheatre on a dirt path, and enjoy the evening. One suggestion is to bring a small flashlight with you, as you want to watch your step when time to leave.

It may not be for everybody, but it is a truly well done presentation and a real experience. You feel as if you just got back to the States when you leave. Much more info and tickets at SerenbePlayhouse.com