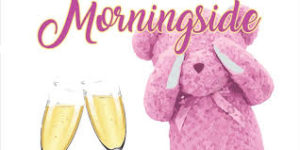 Atlanta playwright, Topher Payne put together a nutty story where a bunch of women show up for a baby shower. Well, maybe they don’t all show up, and that may be part of the story.

This show is an all female cast who really get into the party gone awry. Patty Mosley Nelson is the mother who is hosting the party and trying to get things set up in her garden area. Roxanne (Bobbie Elzey) is just hanging out, thinking that it must be five o’clock someplace. Any excuse is good enough for her. Felicia (Marquelle Young) is trying to help out, but it often seems like trying to ski up a hill. Same sort of situation for Louise (Lynn Grace).

Kate Ash and Rylee Bunton are the sisters Devyn and Clancy; and families are families, you get the idea? The other ladies you will meet are played by Laurie Winkel, Jillian Walzer and Lory Cox. This group of ladies includes a doctor, an architect, a realtor, bartender, and home makers; and each of them has her own set of values and expectations.

The cast all female, and the show is directed by Cathe Hall Payne. Barry N. West created a set that works perfectly, and the audience really felt as if they were invited to this social disaster. But they can also go to the concession stand at intermission, and get themselves a glass of Prosecco to join in with the ladies who party.

Note that Onstage has moved to a new facility which is located at 3041 N. Decatur Road just of East Ponce near 285. Like the previus venue every seat is comfy and has unobstructed view. But this house is a bit small, so get your reservations made sooner, rather than last minute. More info at OnstageAtlanta.com