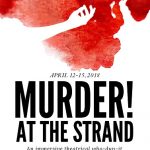 Murder at the Strand
Strand Theatre
through April 15, 2018

Playwright/Director Corey Bradberry came up with the plan to let theatre folks figure out a whodunit which would occur right before their eyes. With an escape room designer, Jeremy Ledbetter in association they put together this 75 minutes of false leads, real clues, weird guesses and more.

The show is more an “event” than a show; inasmuch as you aren’t sitting placidly by in your seat while all action is presented in front of you. You will be on a team of colleagues who try to figure out who offed that poor victim at the start of the event, and how.

There is a sort of egg hunt for real clues versus false leads, and all will come clear at the end, as Agatha would have done. This is a premiere of this creation in The Strand Theatre at Marietta Square, and is a short run, with fewer than 75 investigators permitted in to partake of the adventure.

More info at EarlSmithStrand.org But, they are selling out, so if you snooze you lose.