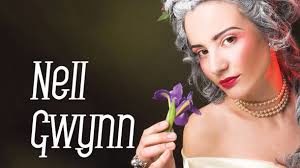 A wonderful tale by Jessica Swale, about a poor gal from the Cheapside who winds up with Charles II, and directed by Richard Garner with a cast of 11 players who come on in the style of the day. It’s been camped up a wee bit, primarily in the lingo used to describe the female anatomy; when in fact Otto Titzling didn’t come into vogue until he appeared in a novel in 1971.

Nell (Courtney Moors) had a pretty lousy younger life. She was a street girl, and had become a prostitute at times. She was born in 1650, and passed away at age 37 after a bawdy life, life in the theatre, and in the homes of royalty. In fact, after Charles got rid of her, she got a town house on the Pall Mall. Not bad for a fruit peddler.

In olden days women were not permitted to take the stage, but once Nell got his eyes (and more) he made it acceptable for female roles to be played by women. She had two sons by the king, one of whom died at age 10 in a school in Paris. They think it may have been some kind of syphilis. Rob Shaw-Smith plays His Highness and her tutor-lover, Charles Hart is played by Eugene H. Russell IV. But, it was her appearance in 1665 in a play by John Dryden (Brandon Patrick) that really made her a star.

The playwright steps up to admit she embellished some facets of the story, but the basic history is accurate; and the play was crafted to bring Nell’s story to us in an easy and humorous manner. Well done!

This theatre is easy to get to on Peachtree Street with really good accommodations. And the good news is that those parking meter cockroaches can’t ticket you after 7pm, so fear not. More info at SynchroTheatre.com