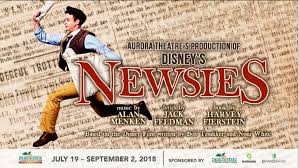 More than 100 years ago we had youngsters yelling out to passers-by to purchase the news. You’ve seen that in many a film and play. That was long before TV and when we had the news thrown at us 24/7. It was when Joseph Pulitzer owned several newspapers and the NYC one became the one that the paper boys rose up against in their earlier version of Me Too.

Disney Productions funded the original shows with music by Alan Menken and Lyrics by Jack Feldman and based on the book by Harvey Fierstein. Justin Anderson directed this show with a cast of more than two dozen players, who run through more than 20 numbers; many of which have exciting choreography designed by Ricardo Aponte; and presented with a live orchestra under the direction of Ann-Carol Pence.

It is pretty poignant right now, as it is some folks rebelling against the very few who control the very most; and when the common folk rose up against the politicians, cops and big businesses, they actually won out. And therein lies the story of Newsies, which is an entertaining production in every way.

It may not be one for the kiddies, but surely rings the bells for the adults in the audience; for it is history recurring and restaged. You will love it. The show is selling out most performances, so get more info and tickets at their website AuroraTheatre.com