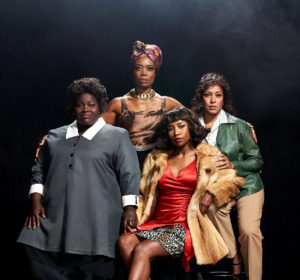 Nina Simone was a pop singer who had a very complex life. Born in North Carolina in 1933, Eunice Waymon changed her stage name to protect her family from any problems. It wasn’t a great time for black performers; but she played in bars and other venues, and her life was convoluted with several marriages and other relationships. On a couple of occasions she took off for the Caribbean and also hit the road to Paris, as did many black performers.

This story of her life by Christina Ham, and directed by Michele Shay, features four women, each of whom may have been a Simone at some time. We se them as Nina (Regina Marie Williams), one called Sweet Thing (Jordan Frazier), Sephronia (Wendy Fox Williams) and Sarah (Adrienne Reynolds). While there is a grand piano onstage she may seem to be on the keys at times, but it is Christian Magby, as Sam, who is providing the music for the eleven numbers which help to move the story along.

It wasn’t easy to be a black activist in her days, and to be seen singing numbers such as Mississippi Goddam, when folks thought she’d be better off singing to Porgy. The show runs in one act and each performer brings quite a bit to the stage; for the problems with which they deal may be thought of as resolved, but that may not actually be totally realistic, if you watch the news most days.

True Colors performs at the Southwest Arts Center on New Hope Road. Easy to get to, free parking, nice art shows, and all seats have a good view. More info at TrueColorsTheatre.org