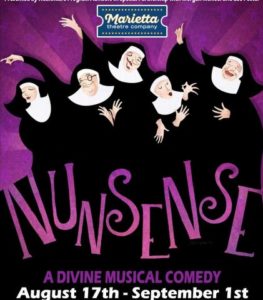 It’s been a few years since this one has been staged around Atlanta, and what a treat to see it once again. If you really enjoyed seeing Sister Mary Jo toss out that first pitch in Chicago; then you’re sure to enjoy these five Little Sisters of Hoboken. When this work of art by Dan Goggin hit the boards in NYC in 1985, it enjoyed a run of more than 3,600 performances; and has been revised several times, and also done as a TV show and a film.

The Sisters had a serious problem. More than fifty of their order had died from food poisoning in some soup made by Sister Julia. They ran short of money to bury all of them, and four were being contained in their refrigerator. So what could they do, other than maybe raise some money by putting on a cabaret act in a local school? Reverend Mother Mary Regina (Kelsey South) is the more-or-less director of the group. She has to manage the other four, Sister Mary Hubert (Hannah Marie Craton), Sister, and puppeteer, Mary Amnesia (Sophia Decker), Sister Robert Anne (Kate Metroka) from Brooklyn and Sister Mary Leo (Megan Wartell) who is a ballerina.

Stephanie Earle directs the show with Shane Simmons working the sound boards. And the theatre’s artistic director, Zac Phelps, put together some groovy choreography. This is quite an enjoyable performance by this new little company. They even have set up some tables, cabaret style, where you can buy four seats and some wine and be right up front. But, every seat has an easy view.

They perform at the Lyric Studio on the Square, just off Marietta Square. Free parking around the square after 6pm. Get more info and tickets at MariettaTheatre.com