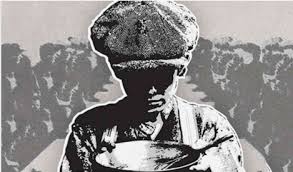 Oliver!
Fabrefaction Theatre
through May 8, 2016

The Fabrefaction Theatre Conservatory has worked hard to help bring young actors along the path to stage success. Presently they are performing at 7 Stages in Little Five Points, and next season they will be housed at Actors Express in their old ’hood.

So it is no surprise that they have a very large cast of youngsters playing many roles, some in rotation from one night to another; as well as six professional adult actors.

You know some of the story as Dickens penned it. An orphan boy in a workhouse gets on the wrong side of the management and the beadle sells him off to a funeral director who uses and abuses a kid like Oliver. When Oliver meats up with The Artful Dodger, he accepts the invitation to escape to some hustler who trains kids such as him to pick a pocket or two each day. That’s how they’ll earn their gruel. And, the story moves on from there as one woman takes a fancy to helping and protecting this youngster and how she winds up paying for her good deeds.

Most youngsters have read or seen Oliver in one version or another; albeit they won’t necessarily recall each of the elements of the plot; nor too many of the musical version numbers. It isn’t an annual event such as Christmas Carol. And the production downplays the anti-Semitic Dickensian lines and the trollops.

Christina Hoff has directed this work, which moves pretty easily. There are some sound problems when the music is amped up quite loudly and few of the performers are mic’d. But, it’s a good initiation experience if you want to help a youngster think about acting or becoming a theatre fan. The conservatory cast members all enjoyed their hours of fame, and they have some matinees that will work easily at 2 on Saturdays and 3 on Sundays. They’re on the main stage at 7 Stages, and there is a parking lot (for pay) right behind the theatre. More info available at Fabrefaction.org