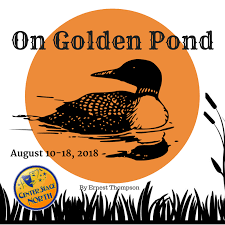 You may have seen the film and/or the play before; but with all the stress going on in our world these days, you could enjoy some laughter. Golden Pond is in a small village in Maine, where Norman and Ethel have a summer home. They spend many days there and pretty much get into the same old stuff every day.

Norman (Jim Wilgus) is not that active, other then reading books and fishing. He isn’t much into helping around the house nor in getting into the lifestyles and affairs of others; and that includes his daughter, Chelsea. On the other hand Ethel (Cheryl Baer) is active, tries to get Norman off his buns, even gets into some working around the yard and in the nearby forest. Not only that but she also cooks great cookies.

They are empty nesters. But Ethel gets a call from Chelsea (Shannon Lindsay) to say she’s heading in from California and will be bringing her male friend, the dentist Bill (Kevin Renshaw) with her. Chelsea and Bill show up with his son Billy, Jr (Kirk Renshaw). So now the old couple have three house guests. This is quite a treat inasmuch as the son, Billy, is the real son of Kevin Renshaw, and they play off one another so well.

The sixth player in the cast is the letter carrier who you may recall has to deliver the mail to the folks around the pond by boat. He is Charlie (Phillipe McCanham) and they’ve all known one another for decades. In fact, Chelsea was the one he always had sought, but never won over.

The plot involves Chelsea getting her dad to understand that she is grown up and she and Bill would share a room and a bed. And later when the couple takes off for Europe, something else comes about and the family is readjusted accordingly.

This all volunteer theatre company does a wonderful job and delivers up one of the most pleasant couple of hours you could imagine. All without any politicians nor commercials. They’re located on Sandy Plains Road; easy to get to and free parking. More info at CenterStageNorth.com But, if you snooze you lose, only one week left.