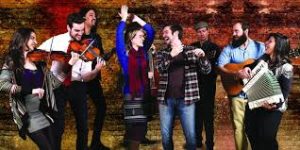 Once
Horizon Theatre
through March 8, 2020

This is not your usual local theatre musical. The play by Enda Walsh hit the boards in NYC 9 years ago and went to Broadway in 2012 where it won 8 Tony’s. While the play in set in Dublin, it could be anywhere, because the things which move the story along are existing in each of us. An incredible cast of actors-musicians perform in the round in another great set by the sisters Curley-Clay, and Heidi Cline McKerley directed and choreographed this really high energy captivating experience.

It starts off with an unnamed Guy (Chase Peacock) on the streets who is ready to walk away from his guitar and abandon his hopes. He meets an unnamed Girl (Maggie Salley) who is a recent immigrant from eastern Europe. They have little in common other than she likes music, can play a piano and sing; and she is not going to let that Guy walk away from what she feels his life could become.

Eight other players complete this great cast and they know how to belt out numbers as if they were actually in some pub in the auld sod. But, even tough some of the chaps might come on as a big baluba, you gotta be knowing that all comes right in the end and the trip itself is a pure delight. With the band playing to the house, you might wish to think it would be even better were you having a pint or two.

This is a totally wonderful production and a joy in every way. I’ve been told it was an award winning film as well; but hadn’t seen it. But, it couldn’t be any better than what the Horizon has to offer. More info at HorizonTheatre.com