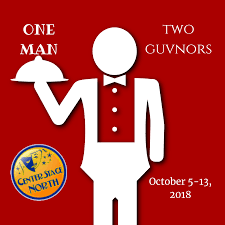 Let’s skip to the bottom line . . . . This local theatre in Cobb is staging an incredible performance of a terrifically funny play, and it has but one more week to run. It is an adaptation of an old Italian commedia dell’arte opus dating back to 1743. Richard Bean updated the work to the 1960’s and set in Brighton, England. That’s the coastal town on what the Londoners used to refer to as La Costa Geriatrical.

This small theatre company has brought together a cast of 13 players, with a Skiffle band of 3 players who move the show along with great music. It is a goofy play, about a character, Francis (Bob Lanoue) who is a weird hustler who winds up fronting for two guys, neither of whom wish to ever encounter the other. The younger Roscoe (Jessie Kuipers) may not be quite the guy one might think. And Stanley (Kevin Renshaw) is his nemesis.

The set is a Moliere type, with one door opening as another closes, and the players come and go. Francis comes off like Stubby Kaye, and he also works the audience as the play moves forward. After all, what could go wrong? EVERYTHING! And the weird waiter Alfie, is played to the hilt by Kirk Renshaw, who takes so many prat falls you feel really concerned.

Directed by Jennifer and Kevin Renshaw, each of the players is first-class, and this one is a couple of hours of non-stop humor, with no politicians speaking at all. Easy to get to and plenty of free parking. But, if you snooze you lose; so visit their website NOW: CenterStageNorth.com