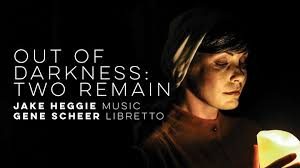 Out of Darkness; Two Remain
Atlanta Opera
through April 15, 2018

This English language opera with music by Jake Heggie and a libretto by Gene Scheer, is being presented by the Atlanta Opera at the Balzer Theatre on Luckie Street, the home of the Theatrical Outfit.

Based in part on the true stories of two Holocaust survivors: the Polish dissident Krystyna Zywulska (1914-1993) and the gay German Jew, Gad Beck (1923-2012); The opera is about two holocaust survivors who tell their stories in the two acts. As the Opera website sets it forth, “the survivors are visited by ghosts of their past. In Act I, Krystyna (Maria Kanyova) shares her gripping story of survival with a journalist, and is helped by the ghosts of Auschwitz who were inspired by her written lyrics.

In Act II, Gad Beck (Tom Key) is visited by his first true love, the poet Manfred Lewin (Ben Edquist), who perished in Auschwitz. As Manfred implores Gad to remember and celebrate their love, the painful truth of their stories and fates emerges. Based in part on the true stories of two Holocaust survivors: the Polish dissident Krystyna Zywulska (1914-1993) and the gay German Jew, Gad Beck (1923-2012).”

It’s a pretty stark set, but then it reflects the inhumane sites being recalled. For the Nazis didn’t try to eliminate only the Jews; they also encamped gays, immigrants, gypsies, and anybody else who didn’t seem to match their idea of Aryan status.

Under direction of Tomer Zvulun with Joseph Machavich conducting, the stories are told; and the movements were choreographed by John McFall. For those of us, of a certain age, who lived through the years of WWII, it could be difficult. But, with the memories of the persecution this month and the celebration of the 70th anniversary of the foundation of Israel, it is a perfect time for this one to be staged.

For it remains true to this day that the evils of the past may never be forgotten and as we hear so much these days, “Never Again.” And the words of George Santayana in 1896 ring in one’s ears as he proclaimed, “Those who cannot remember the past are condemned to repeat it.” One need to look no further than Syria and some other venues of these days.

This is not just for the Jewish community. We are all people and need to treat one another as equals. For it is so often forgotten that even the Koran says that one should treat the stranger and he would his family.