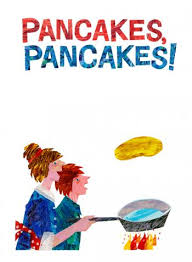 This is a production of their theatre for the very young, and it is a surprise in so many ways. Most families get their children into theatre with Scrooge and Tiny Tim, or some Cats of various breeds. And some of the childrens’ theatre productions are primarily children playing to children. Well, this is quite a different opus.

First of all, it is in collaboration with the High Museum; so families can visit both the theatre and the museum on the same trip. The story of the play is from Eric Carle’s children’s book, Pancakes, Pancakes! who wrote the tale and did the artwork almost 50 years ago. And the High has a special exhibit of more than 80 works by Eric Carle, who specialized in using collages.

The play is a bedtime story about a lad who wants a big breakfast, but he has to help his mother by arranging to get her the wheat, eggs, milk and butter and then help withthe mixing. But, it goes back to the very start of how one obtains these items to start with.

Kenneth Lin wrote this short play and this premiere production is directed by David de Vries. Here’s the incredible aspect. The AARP crowd enjoys the show as much as, or perhaps more than, the kiddies. The set seems at first to be very basic; but the projected imagery by Mike Tutaj is not good; it is superb.

There are four terrific players in this work. Young 14 year old Matt Alea is the youngster with the pancake urge. His mom is Molly Coyne who also plays violin in all the numbers. Rob Lawhon is onstage as the second musician with guitar, and doubles in a supporting roles. The main comedic source is that giant rooster played by Adam Washington. He is terrific and doesn’t chicken out from anything.

What brings this all together so well is the music composed and directed by Phillip DePoy, and the fantastic costumes by Jeff Cone. Add in great stage presence and there you have it. While some shows make you understand why they have no intermission (as it would prevent many from leaving early) this is one when you wish there were a second act, because the first one is just so entertaining.

They perform only weekends and during morning and afternoon times. It is less than an hour, but well worth seeing. More info and tickets at AllianceTheatre.org