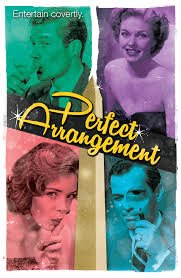 The much acclaimed Topher Payne is a local genius playwright whose comedic works can really knock you out.

He wrote this one 10 years ago, and since then has put together a lot of others. But, time has not eroded the essence of the story. Set in the 1950’s in the DC area, there are two “couples” who aren’t exactly what they appear to be. In fact, the two gay men pose as husbands of the two lesbian women and they literally come, and go, out of the closet (pun intended) in their adjoining apartments.

Adam Koplan directs this great cast and they do a fine job of dealing with issues which seem to remain an issue to this day. Joe Knezevich and Anne Marie Gideon play one couple, while Clifton Guterman and Courtney Patterson play the other couple. Things seem to be going fairly well, and one of the guys is a top level security screener in the State Department. But those were the McCarthy days when Communists and gays were openly discriminated against in business and government; even though the FBI chief was alleged to be a cross-dresser, and when there were no gay marriages.

Kevin Stillwell plays the head of the State Dept. And Ann Wilson comes on as his weirdo wife, Kitty. Kitty is a piece of work, and then things get even more off balance when Barbara Grant (Stacy Melich) shows up. She had some relationship with one of the other women when they lived in Canada, and now she’s in the same office? Not comfy at all.

It’s a typical Moliere farce in that one door closes just as another opens, and characters come and go to a fixed set. But, the issue remains whether any, or all, of the folks are going to stand up and fight for their rights, even though they may suffer the consequences. Remember; this is a nation founded by people who escaped religious persecution in order to inflict their own brand of persecution.

Topher’s play really makes one think. Many states now sanction gay marriages. Why should two people who live as a couple not have health insurance rights and survivorship benefits the same as any other couple? We may say that what happens behind closed doors is nobody’s business; so why should any government care?

They’re downtown on Luckie Street, and offer discounted parking tickets for the garage next door. For performance times and tickets visit TheatricalOutfit.org.