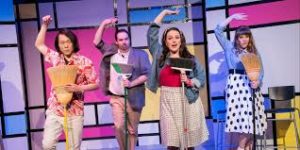 Personals
Out of Box Theatre

Alas, with all that is going on vis-a-vis the Corona Virus concerns, the theatre has decided to cancel all the rest of these shows after Sunday, March 15. But, perhaps it will come back to their stage again in a few months.

Zip Rampy directed a highly energetic cast of six players. The show is set circa 1985 in days when singles used to pay for personals ads in tabloids such as Creative Loafing. The set, ala Piet Mondrian, by Carolyn Choe is the backdrop for the stories being told by Kate Johnson, Katie Patterson and Ashton Montgomery who are three women looking for Mr. Right. But, Stephen Devillers, Christopher Lange and Patrick Hill are three guys looking for the girl of their dreams, even if they may be Mr. Wrong.

The cast works through 15 numbers which were artfully played and recorded by Annie Cook However the timing is spot-on and everything moves along quite well.

So the bottom line is keep your eyes and ears open as the theatre community in our area starts to fire up in the coming weeks. More info always available at OutOfBoxTheatre.com