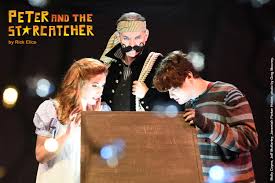 Peter and the Starcatcher
Georgia Ensemble Theatre
through March 13, 2016

A play by Rick Elice derived from a kid’s book by Dave Barry and Ridley Pearson, is sort of a grown-ups bedtime story. Knowing it is not real, yet trying to figure out where it is going. Complete with goodies and bad guys. It is said to be a prequel to Peter and Wendy. In this case, it is Peter who flies off with Molly.

The play had a decent run in NYC to varied reviews. It isn’t the usual musical, nor is it a drama. But it is quite an experience. Heidi Cline McKerley has brought together a superb cast of 14 players, well known in the theatre community. Each of them just “had to” play the role. Bryan Brendle is the British Lord Aster who has to get a trunk of treasure onboard a ship for the Queen. Things go wrong, since there is also a pirate ship in port and these sneaky guys manage to swap the trunk of treasure for one which looks the same but is filled with nothing but sand. And therein lies the fuel for the story.

Lord Aster’s daughter, Molly (played by the real Molly Coyne) has to go onboard a ship apart from the father. And she becomes quite a motivator, dealing with some orphan boys; a nameless one of whom becomes Peter (Jeremiah Parker Hobbs). The evil pirate Black Stache, is played by Jeff McKerley. He’d like to be scary, but it doesn’t always work. Especially when he suffers some problems trying to steal the treasure. His right hand guy is Al Stilo as Smee. The cast also includes Josh Brook, Nicholas Faircloth, Ptah Garvin, Jonathon Horne, Steve Hudson, Vinnie Mascola, Brandon Patrick, Spencer Stephans and Jeffrey Watkins. And if you’ve been to a few shows around town you have seen most of these gents before.

Where else but in a fairy tale would you find a royal frigate and a dumpy pirate ship duking it out on the briny sea, as they set out to Rundoon? Along the way the fights cause Peter and Wendy and others to wind up on an island run by the Mollusks, who do not like any of them. The fight scenes are funny as they get into it. The story line takes you to the mountain top lookout, through a jungle, a jail cage, a deep grotto and more.

The Isabel and Moriah Curley-Clay set has all the fixings to help this story. Albeit the few musical numbers, sung in chorus aren’t what you run out to buy on a CD, they do a good job. The script has loads of word play, such as the names of people, places and even the Norse code used by Lord Aster to signal Molly. This one won several Tony’s when it ran in NYC a few years ago. It isn’t Cats or Les Miz, but the players and the audience enjoyed their evening. For more info and tickets visit GET.org