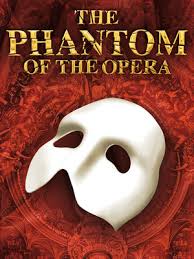 The Phantom of the Opera
Fox Theatre
through March 5, 2017

That masked villain is back in town.  When it played here 7 years ago, supposedly that was the final tour.  But the show is more than 30 years old and still going strong.   Andrew Lloyd Webber’s adaptation of Gaston Laroux’s story certainly must have exceeded any aspirations that Laroux might have had back in 1904.   If you are a big Phantom fan, you might even get a kick out of the original Phantom B&W film made in 1925; and of course it starred Lon Chaney as the Phantom.

You may have seen this one before, or seen the 2004 film version.  But, the story remains the same.  A disfigured guy takes control of the Paris Opera and he wants things done his way, or no way.  Derrick Davis is very energetic and demanding as the Phantom, and he falls for young Christine (Katie Travis) who is also sought after by a would-be lover, Raoul (Jordan Craig).

As you know; all hell breaks loose at the Opera.  Christine spends some time down in the sewers with the Phantom, and we find that things do work out in the end as a tale wherein humanity and compassion morph an inhumane creature into a feeling and compassionate man.  Caution: this does not apply to contemporary history in some parts of the world, nor politics in general.

The show is running until March 5th, and they have even opened up the sale of some of those restricted view seats they normally don’t sell.  The sets are incredible, the costuming is over the top, and the performances are all top grade.   Think of the show really as an opera, in that there are some numbers that when they are being sung (usually in chorus) you can’t understand a word they are singing.  So, it wouldn’t make any difference if it were in French or Italian.

This may not be one for little people.  The story is dark, some scenes a little scary, the tempo is slow, and most of the music (or at least the lyrics) are pretty forgettable.  We all recall some of the melodies such as Masquerade, The Music of the Night, and Point of No Return.  But the words.  No way.

Phantom is a wonderful show.  It may not be as energizing at Les Miz nor as smile producing as Cats; but, it is a night of exceptional theatre, by a first class company.   For tickets and more info go to FoxTheatre.org.