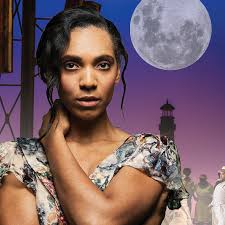 Catfish Row returns to Atlanta as Porgy hobbles around the stage and sets his heart on the somewhat fickle Bess, in George and Ira Gershwin’s signature operatic endeavor. You know many of the pieces from Porgy, which have become standards in American music. Summertime, Bess you is My Woman , I Got Plenty o’Nuttin’ , It Ain’t Necessarily So, and A Woman Is a Sometime Thing. And what you may not know is the story, about a bunch of fishermen living along Catfish Row, the ladies of virtue and easy virtue, and druggies and the terrible power wielded by the white folk’s cops.

Sportin’ Life (Jermaine Smith) is pushing some white powder. Gee, they did that even back in 1935 when we thought everybody was super straight. Crown (Donovan Singletary) is one tough cookie and he figures Bess is HIS woman, even after he takes it on the lam to get away from being strung up by the po-leece. That’s when Bess (Talise Trevigne) is left with no place to call home. But wait. There’s the little hovel on the Row where that crip Porgy lives. Porgy invites her in, and she finds that physical stature is not what makes a man a man in her eyes. At least for a while. Porgy (played alternate dates by Morris Robinson and Musa Nggungwana) has a physically demanding role as he uses the crutch to get around the stage

It may seem odd to listen to an opera sung in English with English supertitles. But, maybe a few words get swallowed, or it helps those who are hearing impaired. The action is sometimes quite slow, but that’s the way the Gershwin’s wrote it. Life moved so much slower 85 years ago.

All said, the cast and chorus is quite good, and the orchestra under the baton of David Charles Abell is first class. This isn’t La Bohème or Carmen; but it’s a natural for Atlanta The performances are at the Cobb Energy Center on March 8, 10, 13 and 15 only. So now’s the time to grab your tickets and enjoy the show. More info at AtlantaOpera.org