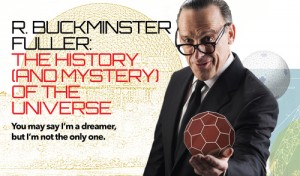 R. Buckminster Fuller: The History (and Mystery) of the Universe

Actor/Producer/Director/Playwright D. W. Jacobs had been immersed in the life of R. Buckminster Fuller; one of the great minds of our recent history. This is a very compelling one-man show with Tom Key on stage as Fuller in two acts which run about 2 hours 15 minutes. And, Tom does great work as he always does in his solo presentations. He IS Fuller.

Fuller was born in the Boston area in 1895, and had a mind that was way ahead of his time. One of his quirks in life was that he kept a history of his life experiences as he went through them. Not just diaries, but tens of thousands of pages which now reside in a college library. As a youngster he had some vision problems, and one may presume that as a result he started to see and sense things in a manner which other 4-year olds did not. For once he got eyeglasses he started to see things he’d not experienced before.

He was a very bright young man and was admitted to Harvard. After the first year he left, only to come back when he was readmitted and then was dropped by them after his sophomore year. He just didn’t do nor think as others would have him do. In this recital of his life, we hear about his thoughts on ecology, architecture, warfare, religion, government, and just about every element of life experience.

He lived and worked in several places with homes in Maine and Illinois. He presented in many cities and countries and was one the road up to 300 days a year in some of those years. While he may not have finished college as most folks do, he was awarded dozens of honorary degrees. He is probably best known for his design of the geodesic dome buildings which have been seen at several international fairs and have been manufactured many times over. Not every design nor patent turned out to be a winner, though. His Dymaxion motor car which could carry 11 adults, run on three wheels and get 30 miles per gallon went nowhere and never got to the assembly line.

He did hang out with the bright thinkers. He was selected to serve as the second president of Mensa from 1974 to 1983. He also recalls actually meeting with Albert Einstein as well as many other big brains. And brains are a top subject for him. The difference twixt a brain, which he sees as a memory bank, and a mind which he sees as a development tool, might be cause for us to think about our world today.

Bucky, as his friends called him, was a believer that if we’d all stop trying to use, abuse and kill one another that the earth could be a fully sustainable sphere where all could live. Well, he may have got that one wrong; as Marx and Lenin didn’t work things out quite right; and it made me think that George Santayana was right-on when he wrote Those who cannot remember the past are condemned to repeat it. and the French have a saying that the more things change, the more they stay the same. And here we are where consumption and greed power the engines which rule this world. And, they probably will still be doing so when we’re all pushing up daisies.

This is a very good production, directed by David de Vries and the theatre is downtown on Luckie Street. They can even sell you a $4 parking pass for the garage which says the fee is sometimes $20. For tickets and more info visit them at TheatricalOutfit.org