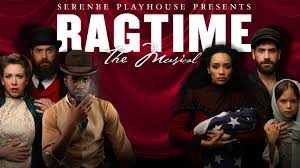 If you have been to Serenbe then you know they perform out of doors. But, with the lousy weather right now, please be advised that this show is performed under a tent, as many of the characters are like old time carnies.

The early 1900’s were not easy days. Factory workers felt they should be paid, women were discriminated against, black folks were considered as all low class, and new immigrants were about as welcome as they may be in these days.

This musical was based upon the book by E. L. Doctorow, who was an incredible writer, professor and researcher. You’ll find his works in every public library. He was the son of immigrants, lived in the Bronx, and knew of what he wrote.

Brian Clowdus, as Director, brings together a cast of 25 players, who are staged on a cabaret styled open stage and backed up with an eight piece band onstage under the baton of Chris Brent Davis; who with the great voices of the players work through 31 numbers in this opus which runs a little more than 2.5 hours.

Coalhouse Walker, Jr. wants to find his place in society and also at the keyboards. But that is not easy for a black gent in New Rochelle in 1902. Another part of the story deals with a white woman who takes in a black woman and baby; not to the greatest pleasure of her husband. And another story line is about the black man who goes wild and decides to become a terrorist at the J. P. Morgan Library.

So we deal with racial profiling and discrimination and the failure of our governments to provide equal justice to all. As the French might opine, “The more things change, the more they stay the same.” Just turn on the news and see where the crazy shooters were, how a woman can’t have control of her own body, the sexual pay differentials, difficulties for the LGBT, and politicians whose moving lips suggest they may be fibbing.

This major musical won 4 Tony’s when it hit the stage in NYC in 1998, and so much of it seems poignant even 20 years later. Serenbe is located off 85 south of Hartsfield, and is fairly easy to find. While they play in many areas in the community, there will be plenty of signage to get you to the open air free parking. Good views, plenty of goodies, and incredibly good productions. More info at SerenbePlayhouse.com