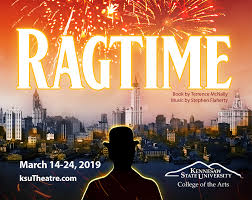 The KSU Department of Theatre and Performance Studies has brought a really Broadway quality production to their Stillwell Theatre. Ragtime, a musical based on the book by E. L. Doctorow, is directed by Amanda Wansa Morgan and it is hard to believe that almost every actor is actually a current student at KSU.

There is a cast of 18 principal players plus and ensemble of 28 more, with a live orchestra of 13 players in the pit under the baton of Cristina Dinella; and they work their way through a score of 30+ numbers. It is not just a ragtime concert, but is a story of a man of a man who likes to play ragtime, at a time when racism was quite a problem and so many citizens were deprived of their rights, while the hoi-polloi just carried on business as usual.

You meet Coalhouse Walker (David Wilkerson III) who wants to find his place in society and at the keyboards. There is also a story of a husband and wife who take in a woman and her baby as part of their family, in a time when mixed families were not common. And then one person who is denied his fair chance to find success, goes off the deep end, which is not so uncommon these days.

The early 20th century in this nation was not a time of great personal satisfaction to every citizen; nor is it so these days. Do we not have people of color being detained or gunned down without cause, gay people being discriminated against, movie moguls with casting couches, and politicians who are for rent when the occasion should arise?

This is a true NYC quality production in a fairly small venue, but it works quite well and there are good views from every seat. It is easy to get to off Chastain Road west of I-75, but shows are selling out quickly as the word spreads. Remaining shows are Thursday 7:30, Friday and Saturday at 8pm, and Sunday final show at 2pm. More info at Arts.Kennesaw.Edu/theatre/ragtime.php