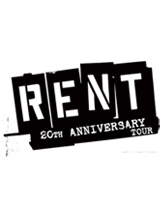 Well they can’t all be winners . . . . Back in 1996 Rent walked off with the Tony for Best Musical and the Pulitzer for Best Drama and it set Broadway in flames with Jonathan Larson’s upbeat adaptation of La Boheme. But this is not your grandfather’s La Boheme by any means. It is more like Opera meets the ’Hood.

Rent is definitely a cult thing akin to Rocky Horror Show. It played here on a National Tour in 2004, and is back now for 20th anniversary tour. This is not for the over 70 crowd and you’ll see an audience of much younger folks, many of whom know the score and start screaming at appropriate times just as the song (and I use the term loosely) they cherish is about to break forth.

Albeit that Rent is a story about some starving artists in a NYC loft rather than a dreary garret in Paris, this is a typical road show with one set, lots of amplification and neither very memorable tunes nor operatic divas. Probably the only tune most people could even relate to is Season of Love (525,600 minutes). Anyhow, most years have only 524,160 minutes but that wouldn’t scan as well and 1996 was a leap year.

The cast is comprised of 15 hard working young men and women who aspire to move on with a career in theater. Working your buns off in a touring company is like paying your dues or being apprenticed to a slave driver. Before you write me off as some kind of Grinch, let me say that for those who love and cherish this show it must be a delight. But, to style it as a musical is akin to classifying The Varsity’s offerings as fine cuisine. The only thing musical about this show is that the sounds generally emanate from musical instruments, except for the echo chamber. The score is not melodic, and a lot of the sounds are often dissonant.

The show obviously has legs. A complex set, live band on stage and a hard working cast and crew. How hard working? When they leave here they’ll play in Mississippi, Arkansas, Ohio and Pennsylvania all in next month. While here they are playing to very full houses, and my guess is that everybody attending has seen the show before and really digs it. For the other side of that coin is that if you don’t dig the first time around, you probably will pass on the next opportunity. But, it’s well done and worth a try. So for more info and tickets just visit FoxTheatre.org