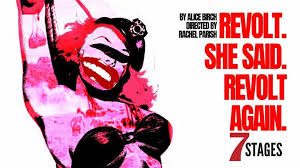 Playwright Alice Birch had had more than enough of the usual crap. She was into the MeToo movements and pulled this one together in a straight to the point series of vignettes directed by Rachel Parish.

It is staged on a blank white square. (No pun intended) and the cast of six nameless players attack the subjects with passion and vigor in 4 acts. The players are Mary Lynn Owen, Dorothy V. Bell Polk, Brooke Owens, Renita James and Patrick Wade and Christopher Hampton.

They change their attire and personae quickly and there is some pretty loud music as well. 7 Stages is easy to get to Little Five Points, but beware of the parking meter cockroaches as they farm Euclid Street,

More info at 7Stages,org If you use .com you will wind up in Deutschland . . . .