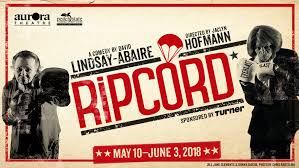 This is one hilarious play by David Lindsay-Abaire. Some of his plays, including Kimberly Akimbo, Good People and the Pulitzer prize winner Rabbit Hole have been produced to great acclaim in our town. This one opened off-Broadway in the fall of 2015 and was directed by David Hyde Pierce. It has provided millions of laughs around the country.

There are a couple of older ladies living in retirement center, akin to an ACLF. The grumpy one, Abby (Donna Biscoe) is a real piece of work. She has the bed by the window and will do anything to retain her rights thereto, as she encourages every other roomie to leave her and go live in another room. But that isn’t going to work so easily with Marilyn (Jill Jane Clements) who is an easy to get along with woman who just doesn’t want to take you-know-what from others. They’re a little like the female odd couple.

The service gent is played by Russell Alexander II, who will deliver food that Abby won’t eat, helps straighten up the room which displeases Abby, and gets dragged into a lot of situations he would prefer to avoid. Several other roles are played by Seun Soyemi, Megan Rose-Houchins and Jacob York.

I can’t get into some details as you want too see them for yourself. Leave it to say that these two ladies decide the way to determine who gets the window area, is to make a bet that Abby will lose if she shows fright, and Marilyn will lose if she gets angry. Then they each delve into a morass of plots to push the other over the emotional cliff.

Jaclyn Hofmann directed this laugh-a-minute, and it is so nice to have humor without politics these days. More info at AuroraTheatre.com