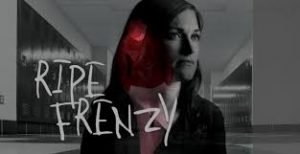 Ripe Frenzy
Synchronicity
through May 6, 2018

With all the insanity in this world, little time seems to pass from one mass killing or atrocity to another. Maybe there were terrible things done ages ago when every event wasn’t thrown at us by the media. As you know, ever since the OJ days, the modus operandi has been “If it bleeds it leads.” And any evening you can tune to the news and that’s the lead story, whereas the good news about a youngster or some other beings comes in after the sports and local stuff.

Jennifer Barclay brought all this together and Synchronicity presents it as part of a rolling premiere. Rachel May directed the production which is set in a small town sort of like Thornton Wilder’s Our Town. There may be but 5 players on stage, but it took a crew of 24 more to get this one to our town.

Zoe (Taylor M. Dooley) is going through a difficult time. Her son is played by Parker Fox Ciliax, who also appears as Bryan James McNamara who had wreaked havoc on the local school like the recent tragedy at Parkland.

There are other mothers in the school, which is getting ready to stage a play they’ve done for 40 years, and Danye Brown, Megan Cramer, and Lizzy Liu come on as four ladies of the school group.

The story is that it’s not just the lives of students that could be lost; but the lives of survivors is permanently and deeply affected. And when we come away from this production we realize even more that we must find ways to see antisocial behavior and to get help for those who need it.

It can be a bit confusing as the audience senses they are both watching and being drawn in to the happenings, and whether or not a character may be real or ghostly. But, the essence of the play is to bring forth that these kinds of vents can arise at any time and in any place, and we must all remain observant. When dealing with some people we need to do as they say in the airports, and if you see something suspicious you call it in.