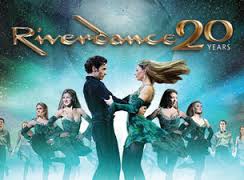 Riverdance, 20th anniversary tour hit Atlanta for three days only this week, and filled the house with incredible energy.

With great rear screen projections, wonderful costumes and a live band on stage, the troupe of more than two dozen dancers brought a thrilling evening to all, and Michael Flatley would agree.

This show was slightly different than some earlier ones, inasmuch as it is not 100% Celtic.  In addition to mostly Irish numbers, they also brought on stage a couple of tap dancers (Tyler Knowlin and JL Williams) who were right out of the Earl Fatha Hines dance book.  And the competition between these two and some of the dancers from the Old Sod was a delight.  The object was to show how some dances could be similar in vastly different cultures; sort of akin to how some foods are so similar but in different cultures.

For instance Marta Ortiz Deusto does a great Flamenco number and both the steps and the score could be from Dublin or even Buenos Aires.  And six dancers do some eastern European numbers which could suggest they may be Turkish, Russian or other ethnicity.  They are referred to in the program as the Russian Ensemble, although they do not do the kazatsky.

The show runs about 2 hours with 18 numbers and believe me, you can’t imagine the amount of energy these dancers put out.  It’s no wonder why they have their own medical team on tour with them.

If you’ve missed this one, make a note that Finding Neverland, opens at the Fox on the 16th.