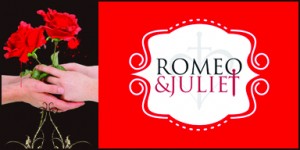 Shakespeare’s tale of love gone bad has long been the symbol of dramatic love. You pretty much know the story and the outcome before you go to see it. For back in Verona in the bad olde days, the Capulets and the Montagues were the original version of the Hatfields and the McCoys. They were a constant threat to one another as well as to all of the townsfolk when they would duke it out on the streets thereof.

Jennifer Alice Acker and Jonathan Horne play the star crossed lovers. After Romeo kills Tybalt he is banished from town and seeks advice and help from Friar Laurence (Steve Hudson). It is the Friar who makes a plan to help the lovers reunite. He whips up a potion that Juliet can use to fake her death, and he plans to let Romeo know by messenger when the act is done. And, of course, anything that can go wrong does; so the message never gets to Romeo, but he does hear of the alleged death and gets frantic. He finds her lying there, and hoping they may share eternity as one, he slurps up a potion that he got from an apothecary. Naturally, as he dies, Juliet recovers from her comatose state, finds him gone; and takes the sword to herself. And there ends the tragedy of these two youngsters; the only good arising from it being the shared grief of the two feuding families who pledge to bury the hatchet (not in each other) and to get on with life.

David Crowe directs this fine cast with some new-day projections and fine fight scenes. It may be old stuff, but still entertains. I just felt sorry for the peasants back in the days of the Bard, when they had to stand in place for more than 2 hours, and all the women were guys in drag.

For performance times, and more info visit them at GET.org