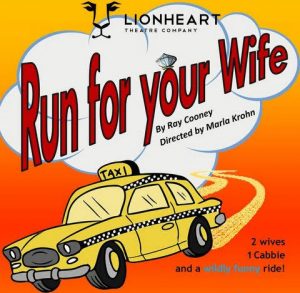 Run for your Wife
Lionheart Theatre
through September 25, 2016

This show is a riot, and has a very short run in Norcross. The cast of 8 players does a great job with this opus, which is a Britcom, sort of like John Cleese meets Moliere.

The story line is insane, of course. A cabbie named John Smith is married to Mary and they live in Wimbledon. He also happens to be married to Barbara and they live a short distance away in Streatham. He carefully designed his shifts so that he can keep the two unions from coming together. But, as in any Britcom, things have to go awry; and they do with great hilarity.

Jeremy Reid is the bigamist, John, and wife Mary is played by Sarah Fechter while wife Barbara is played by Emily McClain. The two neighbors get dragged into the morass and they are the retiree Stanley (Jerry Jobe) and the ultra-gay newbie played by Bob Smith.

This play by Ray Cooney opened in 1983 in the West End and had a 9 year run and since then has played thousands of times in many languages. If you have had enough of politicians and analysts maybe an evening of non-stop laughter would be a better entertainment.

Lionheart is just off the square in Norcross, plenty of free parking and they even provide yummy snacks at intermission. But, be forewarned that this production will be on only Fridays and Saturdays at 7:30 and on Sundays at 2pm. More info and reservations at LionheartTheatre.org