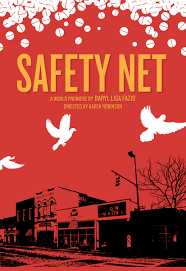 Safety Net is a new work from prize winning playwright, Daryl Lisa Fazio, and this is it’s premiere staging. We get to listen in to the love, stress and chaos which occurs among three women. Set in Jasper County, Alabama it is about a woman who is up for promotion to Fire Chief, while she also deals with many other issues.

Daryl Lisa Fazio plays Chris, the woman fire fighter, who has lots of interactions with addicts who overdose, since the EMTs from the fire department are the most often first responders in most communities. Chris has had her own problems, but she also loves her mother, Xenia (Carolyn Cook) who is getting on in years and like so many of us, hates the concept of not being able to do many of the daily activities she once was accustomed to doing.

Enter a junkie named Val (Rhyn McLemore Saver) who was once a classmate of Chris and now is a street person. She is trying to get clean and that is not working as quickly nor easily as she had hoped for. While Val tries to remain aloof, she is pulled into the home and winds up caring for Xenia, while Chris is caring for everybody. Issues are always just beneath the surface, such as whether or not one should delve deeper into the psyche and habits of another, what is saving others and is it safe for one’s self?

The show runs a little more than 2 hours on a nice set designed by Stephanie Polhemus. And Karen Robinson directs this trio of fine actors as they bring the story right to everyone in the house. While the set may stay as Xenia’s kitchen, when Chris comes downstage to address the staff at her fire station, you feel as if you are one of them.

Theatrical Outfit is downtown on Luckie Street. If there is a ball game or some big deal downtown, traffic can be insane. So leave plenty of time. Park in the garage just north of the theatre and you can get a discounted pass for only $6, even if the garage says $15 or more. More info at TheatricalOutfit.org