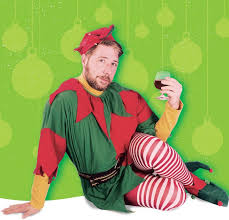 The turkey is unfriended and the lights start to shine on the trees and it’s that time when the malls are full of Christmas Carols, the retailers are hustling you to run up your credit card bills, and most of us just wish that things would change for the better for everybody all around the world. Especially, considering current political situations.

Years ago playwright David Sedaris actually did work as an elf at Macy’s. His humor is great; albeit is loaded with single entendres and occasionally loaded with expletives. So, this is not for the little people, nor the prudes among us.

Directed by Jeff Adler, they have an outstanding cast. Harold Leaver who played Crumpet for 18 years has now retired from elfdom but he is replaced by incredible local performer and playwright, Topher Payne. He is another perfect Crumpet who accepts the original Sedaris plan as a monologue. Topher does the job with aplomb and some updated ad-libs and works the house by interacting with some of the audience.

Enoch King returns as Crumpet’s sidekick and maybe a half a dozen other cameo roles, much to the delight of the audience.. And, Lala Cochran is the female sidekick as well as agent provocateur, in many guises. And two interns get to share center stage with them in several schticks.

Each of these players “owns” their roles, and has played them on a yearly basis. But, WTF? Hasn’t Chris Kayser come on as Scrooge for umpteen years? It’s a standard; akin to going to see the lights at the Botanical Garden or the Nutcracker Ballet. Who says older folks can’t have fun?

It’s 90 minutes of fun and laughter and that’s something we all could use more of these days. And coming up December 2d through 31st they will present Madeline’s Christmas in collaboration with Atlanta Children’s Theatre Company. For tickets, times and full info for both shows just go to horizontheatre.com